9 Ways to Celebrate the Holidays in Indy

Not only is it the most wonderful time of the year, it’s quite a busy time of year too! With the hustle and bustle of the holiday season underway, friends and family will begin to gather throughout the month to celebrate together. Indianapolis has so many sights to see during the holiday season. For some, these are family traditions that they experience year after year! In fact, we learned just this year that there is a family that has been coming to the Indiana State Museum L.S. Ayres Tea Room the day after Thanksgiving for the last 10 years!

We hope some of our favorite things inspire you to start your own holiday traditions! Visit historic L.S. Ayres Tea Room, December – January 1, 2017 – 11:00am to 2:30pm
There is nothing more exciting and magical than spending meal time during the holidays with close friends and family at the re-imagined L.S. Ayres Tea Room at the Indiana State Museum. This year it will be decked out in white and gold holiday attire and feature the many beloved traditions we have all come to know. Included on this year’s holiday menu are some of the Tea Room’s classic favorites like Chicken Velvet Soup. Shrimp Cocktail, Chicken Salad, Classic Club Sandwich and Chicken Pot Pie. The menu will also feature salads, sandwiches, scrumptious entrees, desserts, soup du jour and of course beverages and select teas.

Celebration Crossing, December 2016
Celebration Crossing at the Indiana State Museum invites you to learn about holiday traditions, both longstanding and new. Visitors can ride the Santa Claus Express, visit with Santa and get their photo taken, and participate in holiday- and winter-themed activities on all levels of the museum.

Santa Breakfast at ISM, Saturdays & Sundays in December
During select weekends in December, guests will get to start their mornings off with delicious holiday breakfast as several holiday characters entertain the young ones before they visit Santa Claus and ride the Santa Claus Express at the Indiana State Museum. Reservations are required. Call 232-1637 for reservations. 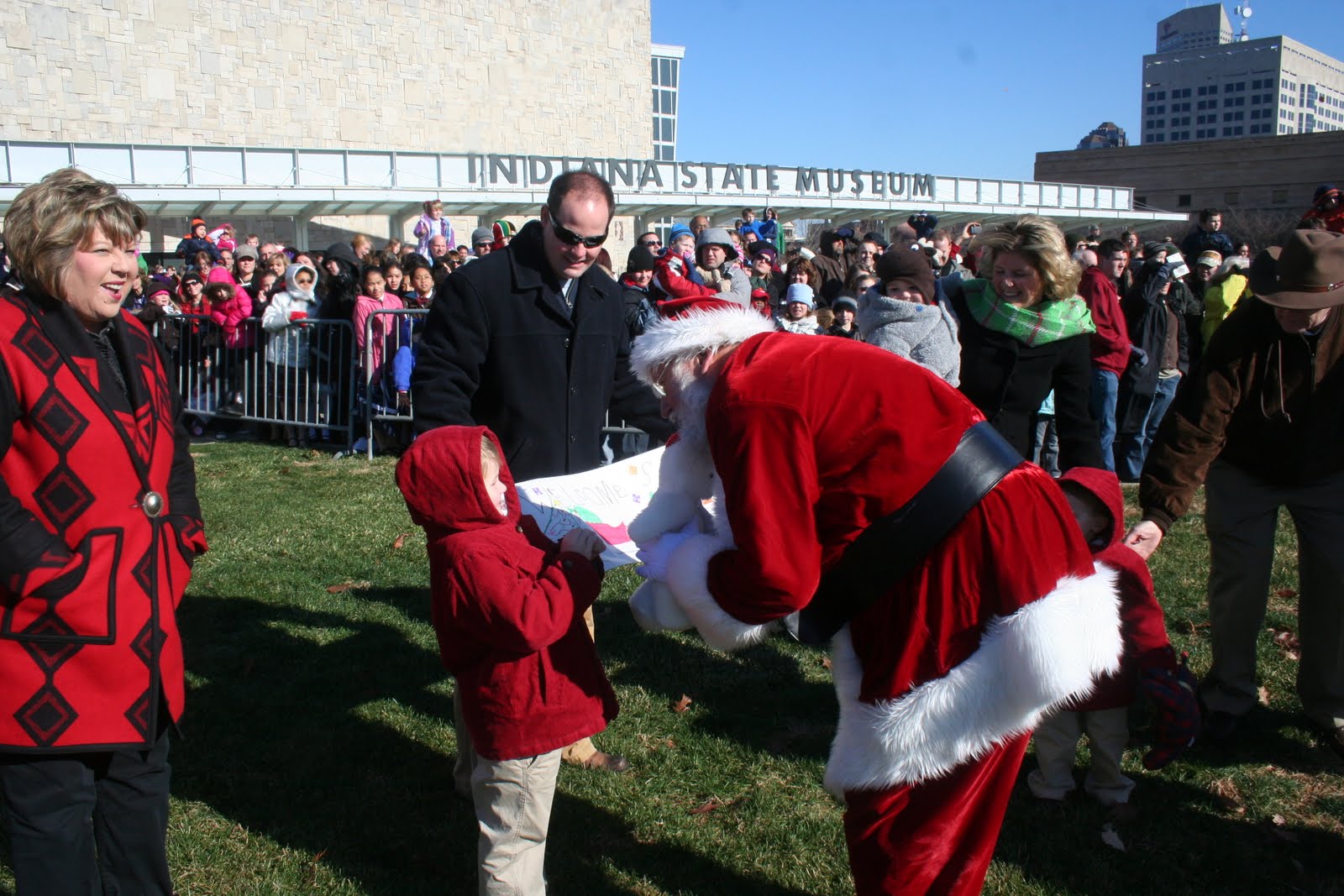 Supper with Santa & Friends , December 15, 2016 – 5:30 to 8:30pm
Indiana State Museum members enjoy a special evening with Santa and Mrs. Claus while enjoying a delicous buffet supper in the Gov. Frank and Judy O’Bannon Great Hall. Visit with Santa at his house, ride the train, have a ball at Santa’s Playground, decorate the members-only holiday and enjoy exclusive access to the museum galleries.

Jingle Rails at Eiteljorg, December – January 16, 2017
Jingle Rails is a wonderland of model trains, which chug along nearly 1,200 feet of track. They go through tunnels, over bridges and trestles, and past scale models of national landmarks, such as Mount Rushmore and the Grand Canyon. The display also includes local landmarks like Lucas Oil Stadium and Union Station — all decorated for the holidays.

Winter solstice Celebration at the IMA, December 22, 2016 – 5:00 to 8:30pm
Bundle up for the annual Winter Solstice celebration! Snap a family photo next to Karl Unnasch’s “tree” of toys and with Santa. At this festive celebration visit Christmas at Lilly House, sing along with carolers, create winter art, meet arctic creatures and watch blocks of ice transform into sculptures at this all ages family event. Christmas at Lilly House, December – January 8, 2017
The historic Lilly House — on the IMA grounds — will twinkle with holiday decorations inspired by the 1930s and 1940s. Among the trees, wreaths and greenery, visitors can see ornaments typical of Depression-era frugality and wartime shortages, as well as the exuberance of the post-war era.

Circle City ‘Tree’ Lights, December 7 – January 7, 2017, Evenings
Circle of Lights is the world’s largest Christmas tree, complete with nearly 5,000 lights and 52 garland strands streaming from Indy’s beloved 242-foot tall Soldiers and Sailors Monument. This tree has been named by Travelocity as one of the top five must-see Christmas trees in the nation. Christmas at the Zoo, December 7-11, 14-23, 26-30, 5:00 to 9:00pm
Christmas at the Zoo is a wintertime extravaganza everyone will enjoy. Stop by the Indianapolis Zoo for its annual light spectacular, and experience one of the nation’s top 10 zoos in a whole new way as hundreds of thousands of sparkling lights delight and inspire.